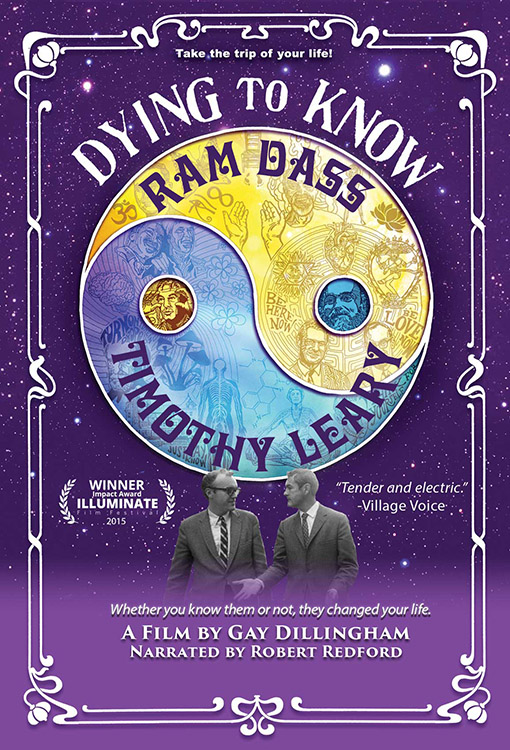 In the early 1960s Harvard psychology professors Timothy Leary and Richard Alpert began probing the edges of consciousness through their experiments with psychedelics. Leary became a missionary for mind altering drugs, asking us to think for ourselves, igniting a global counter-culture movement, landing in prison after Nixon called him “the most dangerous man in America”. Alpert journeyed to the East becoming Ram Dass, a spiritual teacher continuing to teach a new generation and the author of the book “Be Here Now”. The cinematic vision quest encourages us to ponder questions about life, drugs & the biggest mystery in the human landscape.

Now, nearly 50 years later, a new documentary re-assesses the lives of two iconic figures, their work, their successes and failures, the times they lived in and their remarkable shared journey through life. Together as friends, collaborators and individuals they were both celebrated and vilified, but like two sides of a coin, or as the mind and the heart, their work together and apart has become more significant today then, than when they were lightning rods in a time of great social change. Too long viewed as caricatures in a larger game power and social upheaval, the new film takes a fresh and entertaining look at these men and their times. Whether you've heard of them or not they've changed your life and those of a generation.

"an engaging oral history of Leary and Dass's friendship."

- The Village Voice
"A pensive documentary shedding light on death and dying, inner space exploration and the sweet fragility of life."
- Spirituality and Practice

“The idea of anything that expands our thinking beyond conventional borders has always been of interest to me. When I see the living, breathing portraits of these characters, especially the early archival footage... To see them intelligent and smart – they were a kind of blessing considering how they have been caricatured in later times. I like what this film explores and I’m glad to be a part of it."

- Robert Redford
"We can feel the bond that these two men had for each other - and it makes for a genuine love story."
- The San Francisco Chronicle
Cast
Timothy Leary
Ram Dass
Robert Redford