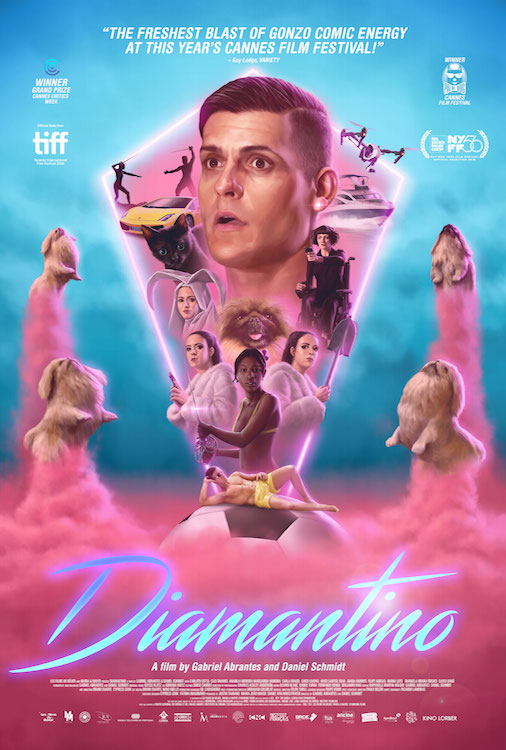 When big-hearted but dimwitted Portuguese soccer hunk Diamantino (Carloto Cotta, Tabu) blows it in the World Cup finals, he goes from superstar to laughing stock overnight. His sheltered worldview is further shattered after learning about the European refugee crisis and he resolves to make amends by adopting an African refugee – only to find that his new “son” is actually an undercover lesbian tax auditor investigating him on the suspicion of corruption. From there, Diamantino gets swept up in a gonzo comic odyssey involving cigarette-smoking evil twins, Secret Service skullduggery, mad science genetic modification, and a right-wing anti-EU conspiracy. Vividly photographed in Super 16mm and featuring the biggest stampedes of giant Pekingese puppies you’ve ever seen, Gabriel Abrantes and Daniel Schmidt’s genre-blending and gender-bending satire is the high-camp masterpiece of 2019!

"The funniest gender-bending, human-cloning refugee-crisis soccer comedy I’ve ever seen, and also the most thoughtful."

“So great! An insane gusher of fun, smartness, beauty and stunning unpredictability. It filled me with a giant pink fluffiness from which I don't ever want to be separated!”

"Ferociously funny... a fever dream of a present wrecked by capitalism and its attendant calamities."

"The sweetness of the film finds an amusing complement in its strange eroticism, itself part of the queerness of its genre mixing."

"In a story involving straight-out-of-a-fairytale evil sisters, hormone-shifting clownfish genes, and massive canine hallucinations, the tender, unexpected love story—mined from Diamantino’s capacity for compassion—turns out to be the beating heart of this Frankensteinian genre film."

“Critic’s Pick! Nothing less (and so much more) than the movie the world needs right now.”

“The kind of out-there plot that John Waters might have concocted had he ever taken an extensive screenwriting holiday on XTC in the Algarve. A smart exploration of the transgressive nature of queer desire. Finally, you can have your B-movie cake and eat it with grade-A ideas too.”

“A magical testimony to the transformative power of goodness. Pulls off a rare and delightful feat. It is imaginatively strange, but has a heart big enough to make sense of the insensible.”

“Has the audacity to be silly. But not only silly… it is impressively rooted in the prickly, politically piquant modernist cinema of the late 60s like that of Godard and Pier Paolo Pasolini.”

"In a story involving straight-out-of-a-fairytale evil sisters, hormone-shifting clownfish genes, and massive canine hallucinations, the tender, unexpected love story—mined from Diamantino’s capacity for compassion—turns out to be the beating heart of this Frankensteinian genre film."