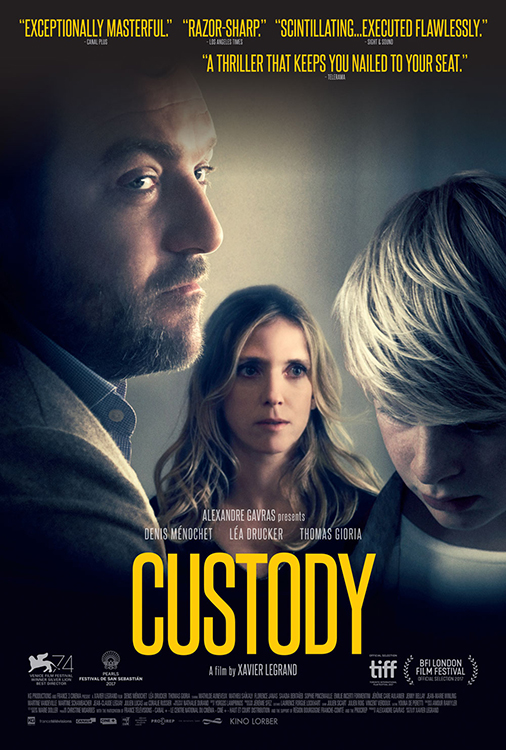 A broken marriage leads to a bitter custody battle with an embattled son at the center in this domestic thriller that will keep audiences guessing and leave them with their hearts in their throats. Miriam and Antoine Besson have divorced, and Miriam (Léa Drucker) is seeking sole custody of their son Julien (Thomas Gioria) to protect him from a father she claims is violent. Antoine (Denis Ménochet) pleads his case as a scorned dad whose children have been turned against him by their vindictive mother. Unsure who is telling the truth, the appointed judge rules in favor of joint custody. A hostage to the escalating conflict between his parents, Julien is pushed to the edge to prevent the worst from happening. Director Xavier Legrand has cited Kramer vs. Kramer, The Shining, and The Night of the Hunter as inspirations for CUSTODY. A companion piece to his Academy Award®-nominated short film Just Before Losing Everything, the film won him the Silver Lion for Best Director at the Venice Film Festival.

“Critic’s Pick! Legrand... gives this closely observed drama the tension and urgency of a thriller.”

"Worth every minute… impossible to forget. Crackles with low key but intense emotional involvement."

"Powerful... exquisitely acted... one of the most realistic and heartbreaking performances by a child actor I’ve ever seen."

“Simmering entertainment that amounts to required viewing. Viewers… won’t be surprised to learn that Legrand counts among his influences Hitchcock, Haneke, Chabrol and Kubrick."

“A film of true skill, insight and present-day relevance, Custody is one of the finest movies that came out of 2018.”

“With unforgettable performances and a precise visual style to ratchet up the suspense at every turn, Legrand shows himself as an artist worth remembering.”

"The most dazzling fusion of grim social realism and giddy genre thrills since Cristian Mungiu’s 4 Months, 3 Weeks and 2 Days."

"Somewhere between Hitchcock and Chabrol, a thriller that keeps you nailed to your seat."

“We will be seeing much more of this filmmaker in the years to come.”

“This is the arrival of a major talent, and a hell of a movie.”