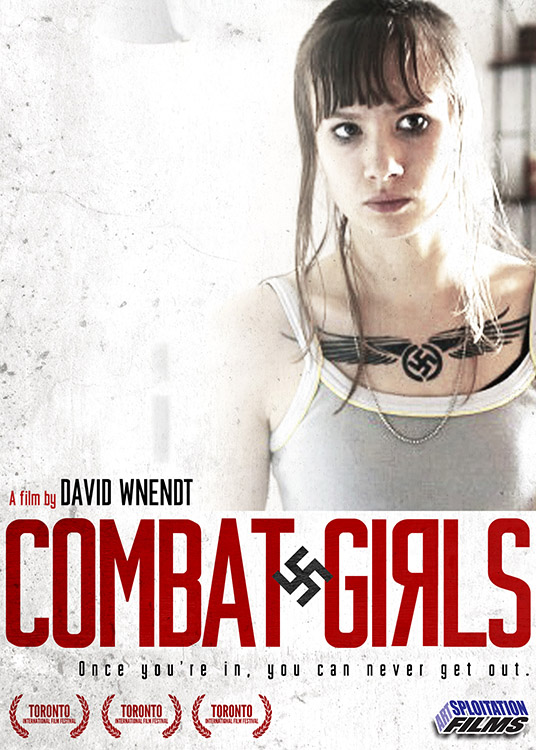 This searing coming-of-age teen drama follows two suburban girls from vastly different backgrounds who both become ensnared in the Neo-Nazi youth movement.
Twenty-year-old Marisa is a hardcore believer, a semi-skinhead whose body is adorned with Nazi tattoos. Fourteen-year-old Svenja is a sheltered, spoiled, straight-A student who becomes fascinated with the group because of her Neo-Nazi boyfriend. They begin as adversaries, but soon become best friends, though their loyalty to each other is shaken when Marisa decides she wants to leave the group. "COMBAT GIRLS is a unique coming of age story that subverts expectations and transcends beyond the crude lifestyle of its lead to find a beating, raging heart" (Twitch Films).

"A masterful debut feature illuminates the fascination with violence among young people in the right-wing scene and goes where it hurts." - Rolling Stone

"Gritty and methodical, Combat Girls represents an opening salvo from a filmmaking talent worth keeping an eye on." - Film School Rejects

"Eschewing stylistic showiness, the pic is sharply assembled on all fronts." - Variety

"Combat Girls goes for the jugular vein of Neo-Nazi youth culture. The anger of poverty in a once great and powerful nation. The seething frustration that led to the rise of the Nazi Party in the first place. History repeating on small scale all over the world. Powerful and affecting lead actress Alina Levshin is going to be a wicked big star and writer/director David F. Wnendt is definitely one to keep your eye on." -Pan Magazine