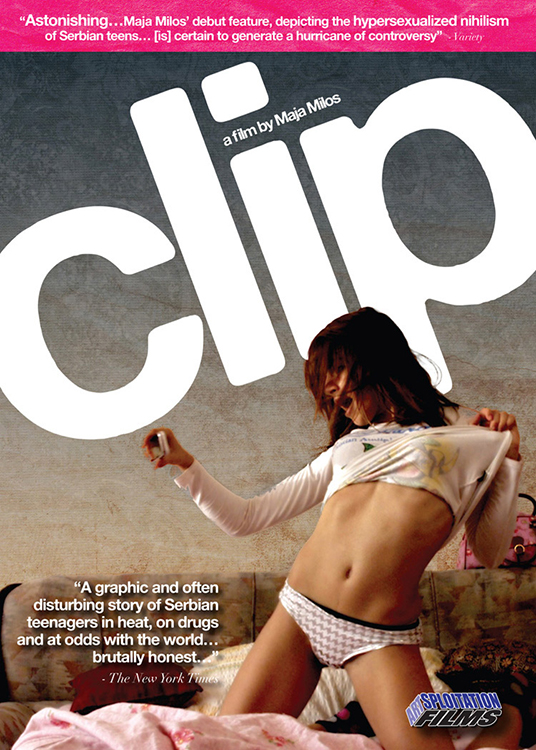 A rebellious teenager’s relentless exploration of her new-found sexuality is the theme to this bold and very explicit drama. Fourteen-year-old Jasna (the mesmerizing Isidora Simojonivic) lives in a dreary Belgrade suburb with her critically ill father and a nagging mother, so she flees with her gang of friends into a world of drug and alcohol-filled parties, always recording the debauchery in clips on her cell phone. She seeks comfort through her thuggish boyfriend, but he treats her as nothing more than a roughed-up sexual plaything, and as her loneliness mounts, Jasna finds herself unable to control her desires…or her life. Winner of the Tiger Award for Best Film at the Rotterdam Film Festival, the film has generated controversy all over the world (and has been banned in Russia) for its raw, graphic sexuality among the teenage cast. Like a Serbian take on Larry Clark’s Kids, CLIP is courageous, uncompromising filmmaking and marks an extraordinary debut for its gifted writer-director Maja Milos.

"An explosively energetic tale of dysfunctional love and explicit sex among the post-Facebook generation...Milos shoots with visceral immediacy and stylistic panache." - Stephen Dalton, The Hollywood Reporter "CLIP turned out to be one of the most unflinching and controversial portraits of teenage lust, longing, anguish, and rebellion ever captured on camera. I haven't been able to forget it since." - MovieMaker.com