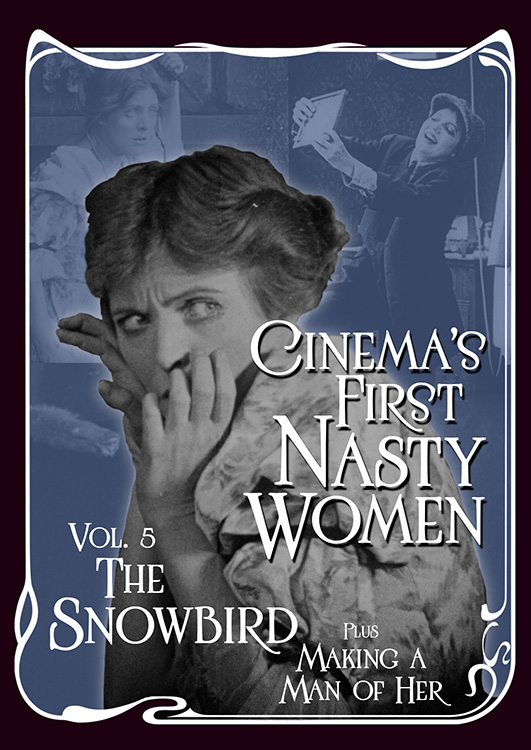 Vol. 5 - The Snowbird plus Making a Man of Her.

An amazing S/M man-boy romance shot on location in the Hudson Bay region of northern Canada. New York society girl Loris Wheeler (Broadway star Mabel Taliaferro) disguises her gender and tracks down the isolated cabin of declared woman-hater Jean Corteau (Chickasaw actor-director Edwin Carewe) to find the last remaining copy of her father’s deed to a tract of forest. When Jean finds the disguised Loris in a snowdrift, he declares, “Like a wounded snowbird you have dropped from the sky to share my loneliness--here you can stay and be my boy!” Jean makes his boy fetch water, scrub the floor, and polish his tall black leather boots. After a series of heated confrontations, they fall in love (of course!). Though they go back to “the land of so-called civilization,” they ultimately return to the “great Northland.” Variety declared the film “full of vim, vigor and class” and the Washington Post praised the “unusually picturesque locality” and “really wonderful photography.”

In this gender-bending comedy, a woman disguises herself as a man in order to get a job as a cook on a ranch. While two women quickly discover her secret, the men on the ranch are not so quick to realize. Jealous of the attention she is receiving from the girls, the ranch hands insist she prove her manliness in a boxing match. Once her true identity is revealed, the men are apologetic and one rancher proposes. The film ends with a racist blackface gag in which a white man, dressed as a stereotypical mammy caricature, is hired as the new cook—the joke being that she is so undesirable that there is no risk of her running off with one of the cowboys.