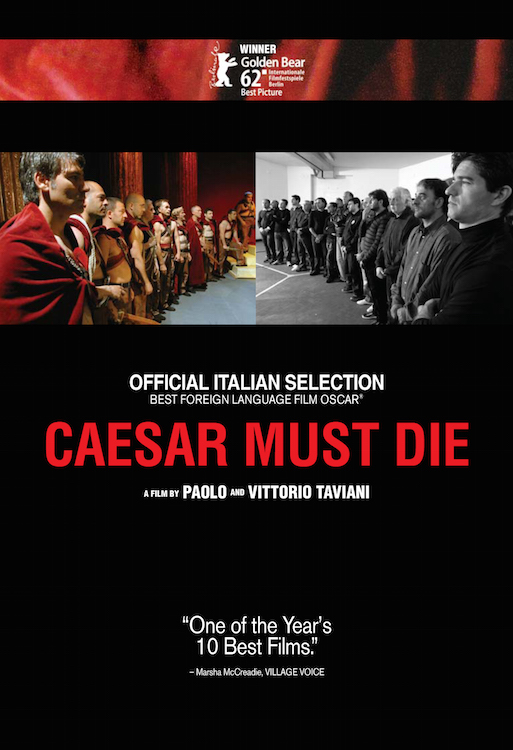 The theater in Rome's Rebibbia Prison. A performance of Shakespeare's Julius Caesar has just ended amidst much applause. The lights dim on the actors and they become prisoners once again as they are accompanied back to their cells.

Six Months Earlier: The warden and a theater director speak to the inmates about a new project, the staging of Julius Caesar in the prison. The first step is casting, a process both vivid and energetic. The second step is exploration of the text. Shakespeare's universal language helps the inmate-actors to identify with their characters. The path is long and full of anxiety, hope and play. These are the feelings accompanying the inmates at night in their prison cells after each day of rehearsal.

Who is Giovanni, who plays Caesar? Who is Salavtore-Brutus? For which crimes have they been sentenced to prison? The film does not hide this.

The wonder and pride for the play do not always free the inmates from the exasperation of being incarcerated. Their angry confrontations put the show in danger. On the anticipated but feared day of opening night, the audience is numerous and diversified: inmates, actors, students, directors.

Julius Caesar is brought back to life, but this time on a stage inside a prison. It's a success.

"A fascinating piece of behind-bars theater that is also an absorbing work of cinematic meta-narrative, this is highly recommended." - C. Cassady, VIDEO LIBRARIAN

"It enlarges your notion of what theater and cinema, what art itself, can do - it dissolves every boundary it meets." - David Edelstein, NEW YORK MAGAZINE

"One of the year's 10 best films." - Marsha McCreadie, VILLAGE VOICE

"a STUNNING CONFIRMATION of the Tavianis' instincts. "Caesar Must Die" shows us in the starkest possible terms the ELECTRIC POWER OF DRAMA to move and touch not only audiences but the actors who bring so much of themselves to their performances." - LOS ANGELES TIMES

"Freedom and incarceration are popular images for the experience of life...But the notion works both figuratively and literally in Caesar Must Die, and it is profoundly moving." - THE OBSERVER