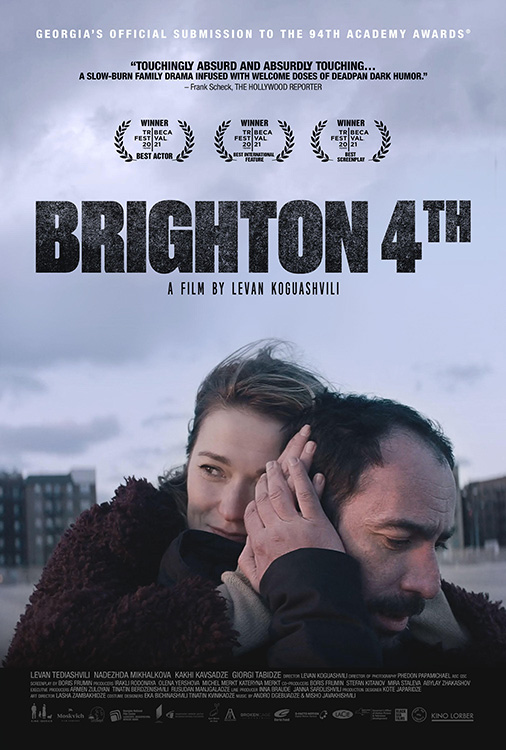 In this portrait of parental sacrifice and the love of a father for his son, former wrestler Kakhi (played by real-life Olympic champion Levan Tediashvili) embarks on a journey from his home in the Republic of Georgia to visit his son Soso (Giorgi Tabidze) in the Russian-speaking neighborhood of Brighton Beach, Brooklyn. There he finds him living in a shabby boarding house populated by a colorful group of fellow Georgian immigrants. Soso is not studying medicine, as Kakhi believed, but is working for a moving company and has accrued a $14,000 gambling debt to a local Russian mob boss. Kakhi sets his mind to helping his hapless son out of his debt, leading to situations as often comic as they are dire. Lensed by Oscar®-nominated cinematographer Phedon Papamichael (The Trial of the Chicago 7, Nebraska), Levan Koguashvili BRIGHTON 4TH won three major awards at the Tribeca Film Festival – Best International Film, Best Actor, and Best Screenplay – and is Georgia’s official submission to the 94th Academy Awards®.

“Has a cumulative impact that is unmistakable. Sneaks up on you stealthily before flooring you with an emotional sucker punch.”

“A near-perfect, semi-comic portrait of the low-rent Georgian enclave in Brighton Beach."

“A touching and surprising exploration of masculinity that features a stunning central performance from former Olympic wrestling champion Levan Tediashvili.”

“Equally warm and melancholic with a rich vein of tragicomedy.”

"A compelling portrait of the Eastern European community that exists in Brighton, [featuring] a great performance by Tediashvili, in his first film role."