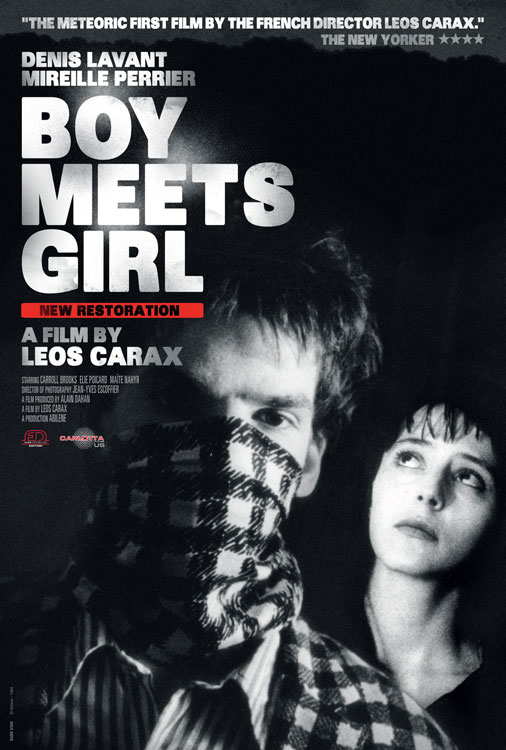 Paris by night. Alex, 22, wants to become a filmmaker. He is fascinated by first times and his girlfriend, Florence, has just left him for his best friend, Thomas. First break-up, first attempted murder: Alex tries to strangle Thomas, but gives up and wanders the streets. That evening, Mireille, a girl from provincial France who has come up to Paris to make commercials, is left by her boyfriend. Alex witnesses this separation. These two tormented souls run into each other at a party....BOY MEETS GIRL, Leos Carax's first feature film, reveals an extreme sensitivity. This atypical masterpiece bluntly displays the social uneasiness of young adults suffering from the torments of their waning teenage years, echoing Carax's own blues and the disillusionment of the 80s generation. Glowing with a melancholic and nocturnal poetry through his brilliant, reference-crammed stage direction, BOY MEETS GIRL has revealed the director of Holy Motors and Mauvais Sang as a first-rate author and aesthete.

"The director's slight uncertainty creates a fascinating tension that works in Boy Meets Girl's favor. You empathize with the characters' struggles even as they are both kept at a critical distance." - Time Out New York


"A debut feature of extraordinary passion and vigor." - VILLAGE VOICE