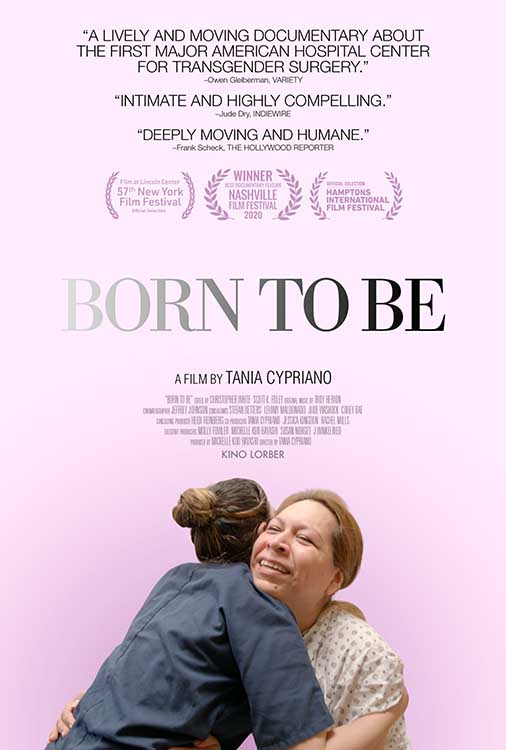 BORN TO BE follows the work of Dr. Jess Ting (he/him) at the groundbreaking Mount Sinai Center for Transgender Medicine and Surgery. There, for the first time ever in New York City, transgender and gender non-binary people have access to quality gender-affirming care. With extraordinary access, this remarkable documentary offers an intimate look at how one doctor’s work impacts the lives of his patients as well as how his journey from renowned plastic surgeon to pioneering gender-affirming specialist has led to his own transformation.

Dr. Ting's patients are as diverse as the city itself. Cashmere (she/her), decades sober and with a zest for life, offers an invaluable queer history lesson as she looks back on the tumultuous existence she once led on the streets of New York. Jordan (they/them) is non-binary and, with their nurturing partner by their side, finally has the support they need to take the next step in their transition. The loquacious Garnet (she/her) moved to New York City to transition and has the full support of her family, but still struggles with depression. Shawn (he/him) signed up for a new type of gender-affirming surgery pioneered by Dr. Ting with the help of brave patients like him. And heart- and scene-stealer Mahogany (she/her) was once a successful male model, but sacrificed her career to begin life as the woman she is. Through their stories, their joys and hardships, the film addresses the nuances and complexities of gender, exploring key issues around the human right to define gender for oneself.

"A brave, revelatory, and beautifully realized film, it is easily one of the year’s best and most important documentaries."

"Deeply moving and humane. Born to Be distinguishes itself with its sensitive, humane portrait of the dedicated Dr. Ting, his hard-working staff (some of whom are transgender themselves), and his diverse patients who yearn merely to live in a body that reflects their inner identity."

"A lively and moving documentary about the first major American hospital center for transgender surgery shows us what the future will look like. Moving and fascinatingly forward-looking. What the Mount Sinai center represents is a paradigm shift, if not a revolution."

"Intimate and highly compelling... poignant and finely tuned. Tania Cypriano treats her tireless subject with utmost sensitivity. With its cinematic eye, compelling subjects, and elegant awareness of the issues, Born to Be was conceived just in time."

"Enlightening. The film has an exuberantly infectious life to it… We’re watching history be made with a sympathetic and respectful eye to everything that entails."