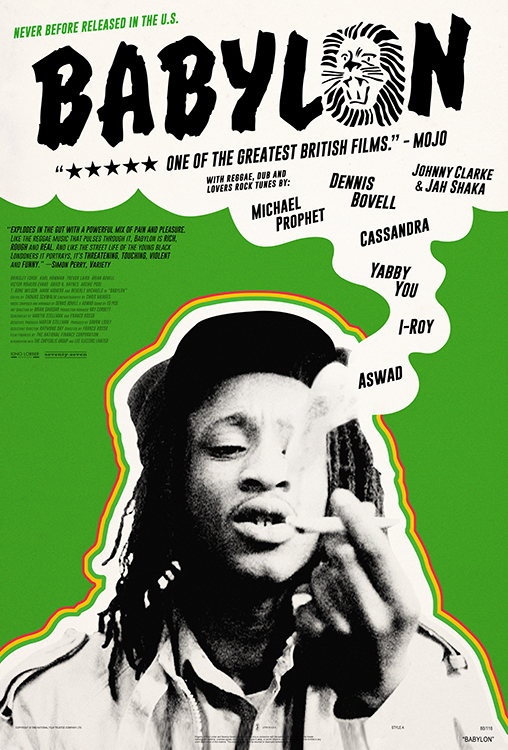 Franco Rosso's incendiary BABYLON had its world premiere at Cannes in 1980 but went unreleased in the U.S. for "being too controversial, and likely to incite racial tension" (Vivien Goldman, Time Out). Raw and smoldering, it follows a young dancehall DJ (Brinsley Forde, frontman of landmark British reggae group Aswad) in South London as he pursues his musical ambitions, battling fiercely against the racism and xenophobia of employers, neighbors, police, and the National Front. Written by Martin Stellman (Quadrophenia) and shot by two-time Oscar® winner Chris Menges (The Killing Fields) with beautifully smoky cinematography that has been compared to Taxi Driver, BABYLON is fearless and unsentimental, yet tempered by the hazy bliss of the dancehall set to a blistering reggae and lovers rock soundtrack featuring Aswad, Johnny Clarke, Dennis Bovell, and more.

"CRITIC'S PICK. Babylon is a 39-year-old nugget of a movie about young British Jamaicans and their itinerant reggae scene built around sound systems, freestyling and parties with rich, low lighting. Just as seminal an entry in the English “angry young man” sweepstakes as the plays, novels and movies about alienation made in the 1960s. Babylon amounts to something that still feels new. You’re looking at people who, in 1980 England, were, at last, being properly, seriously seen."
— Wesley Morris, The New York Times

"Assertive and ebullient, Babylon is as alive as a movie can be to the everyday mesh of liberating art, humorous camaraderie and hazardous political reality. Dennis Bovell’s reggae soundtrack...is a master class of mood — a sonic heartbeat full of joy, pain and fury, the needle drops like matches struck and the music an insistent, scented flame you hear, see and feel."
— Robert Abele, The Los Angeles Times
"Like the reggae music that pulses through it, Babylon is rich, rough and real. And like the street life of the young black Londoners it portrays, it's threatening, touching, violent and funny. This one seems to explode in the gut with a powerful mix of pain and pleasure."
— Variety
"Invaluable. Spills over with killer reggae on its soundtrack. Nearly four decades after its Cannes premiere, the pic is finally getting US distribution... it deserves a robust welcome."
— John DeFore, The Hollywood Reporter
"Babylon does more than borrow the music, fashion, or world view of reggae. It embodies the ethos of the music—and it feels like a song, swaying from a clever joke to fire and brimstone, conveying a message less through language than through the passage of sound waves through bodies. "
— Hua Hsu, The New Yorker
"A STORY WITH LITERALLY EPIC STAKES. It's no surprise why the film may resonate now—its themes of finding community through art and trying to exist in a society that doesn't want you are unfortunately both timeless and extremely current."?
— Jaya Saxena, GQ
"Babylon is a British cult classic [with an] irresistibly danceable dub soundtrack...a beautiful time capsule that shines a light on the vibrant underground culture that existed in early 80s south London."
— Oliver Lunn, BFI
"The 1980 cult classic considered by many to be the great U.K. reggae movie."
— David Fear, Rolling Stone
"It became a cult hit, resonating with reggae heads and black Londonites far before America experienced similar honesties with Do the Right Thing."
— Noel Ransome, Vice
"Reggae music and soundsystem culture are Babylon’s anchor. Babylon is most assuredly a window into a moment in time. Had it not generated such a cult following, we might have missed the lessons it has to offer all these years later."
— Grace Shutti, Afropunk
"Stands as a vivid time capsule of London’s then-burgeoning sound system culture and a call to arms for the disenfranchised during times of strife."
— Jordan Cronk, The Hollywood Reporter

"A rich, gorgeously shot film. Today, with racially charged nationalism once again on the rise, normalized by certain world leaders...Babylon's message is, sadly, no less relevant now than it was four decades ago. Fortunately, this time around, that message isn't so easily suppressed."
— David Alm, Forbes

"Babylon has too much to say about keeping your head up when everyone wants to grind your face into the pavement—and to say it with so much heart—to be left in the rubbish bin of history."
— Cosmo Bjorkenheim, Screen Slate
"A Jamaican-British version of Scorsese’s Mean Streets...with its vivid cinematography, incredible soundtrack, and powerful message, it became a cult flick for Jamaicans and reggae heads around the world."
— Shirine Saad, Hyperallergic

"Babylon maintains a vibrant sense of life that cannot and will not be destroyed by hate. Babylon is a hidden gem worth seeking out if it comes to your city. Pulsating with lively music and righteous anger, in a world that remains far too resistant to multiculturalism, it provides an uncomfortably vivid reminder that still we have not come far enough."
— Lee Jutton, Film Inquiry

"The lead performances are so genuine and the dialogue, with tones ranging from unbridled glee to utter hatred, is so pure that you think at times that you’re watching a documentary. Babylon is a vivid story that offers no clear villains or angels. Instead, it gives you the truth."
— Candice Frederick, The Wrap

"[A] transfixing independent triumph. The reason you can’t look away and do not want to from Babylon is how fully engrossing each and every scene is throughout.  It must be experienced to fully comprehend, and come away with the undeniable truth: Franco Rosso’s Babylon is an exemplary example of how to craft an honest film that speaks volumes in a subtle way that audiences will resonate with on multiple levels. I’ve come to equate Babylon to a movie held in a time capsule, to be shown to the world at the exact right moment. This is the moment in the United States."
— Kathryn Schroeder, Film Fracture

"Babylon is a pulsating document of a time and place as well as a piece of connective tissue from the past to the present. Its restoration and re-release are a boon both because of the film’s undeniable quality and because of its somehow still radical empathy."
— David Bax, Battleship Pretension

"Since its release in the UK in 1980, Babylon has only been available in the United States through poorly transferred versions with fuzzy visuals and muddied sound, where much of the patois is lost on American audiences due to lack of subtitling, but the recent restoration by Kino Lorber corrects all of these former shortcomings, so now, we can see Franco Rosso’s masterpiece for all that it was meant to be: an energetic, brutally honest, and again, uncompromised statement by Rosso on the treatment of West Indian immigrants in London during Thatcher-era England."
— Generoso Fierro, Ink 19

"The startling Babylon is a needed blast-from-the-past devoted to reggae life and longing as it reminds us collectively how a mere puff on a blunt cannot easily erase the cultural indignities that others bestow on one another systematically."
— Frank Ochieng, Screen Anarchy
"FEARLESS…loud and musical and cheerful and funny, and also tragic."
— The Times (London)
"SUPERB… TRUE, TOUGH, ELECTRICALLY ALIVE…one of the best British made films for years. Has more shock potential than five put together…it begs no sympathy, imports no glamour, but transfers to the screen with powerful rough-edged vigor a picture that has never really been seen before."
— The Sunday Times (London)
?"REMARKABLE…its hard edge is undeniable…never lets go for a moment. Babylon was the first British non-documentary to centre on reggae...a unique musical time capsule."
— The Guardian
"An instant classic."
— BFI
"FIVE STARS. One of the greatest British films."
— Mojo
"Babylon captures the zeitgeist of the era, avoiding the grip of nostalgia, instead providing a harrowing yet ultimately uplifting account of a cultural and spiritual triumph over the adversities of poverty and overt racism (institutional and physical) that were still so ingrained in Thatcher's England."
— Electric Sheep
"Fueled by a terrific dub soundtrack courtesy of (Dennis) Bovell and the amiable lead performance of (Brinsley) Forde."
— The Digital Fix
"A crucial piece of documentary evidence as to how Afro-Caribbean communities in London lived beneath the media radar. Arguably the film is made by (Chris) Menges's photography, from the Taxi Driver-jaded kitsch of the Soho arcade scenes to the roving camera of the sensitive engagement party scene, to a post-dance lilac dawn over Deptford set against a piss-darkened tower block walkway."
— The Independent
"The elusive, and only, feature film focusing on the sound system scene in West London."
— Wax Poetics
"Babylon perfectly evokes the growing racial tensions-and intense feelings of doom-of inner city London life during the late 70s/early 80s that ultimately culminated in the fiery Brixton riots. Highly recommended."
— Dangerous Minds
Crew
Directed by Franco Rosso
Writers Franco Rosso and Martin Stellman