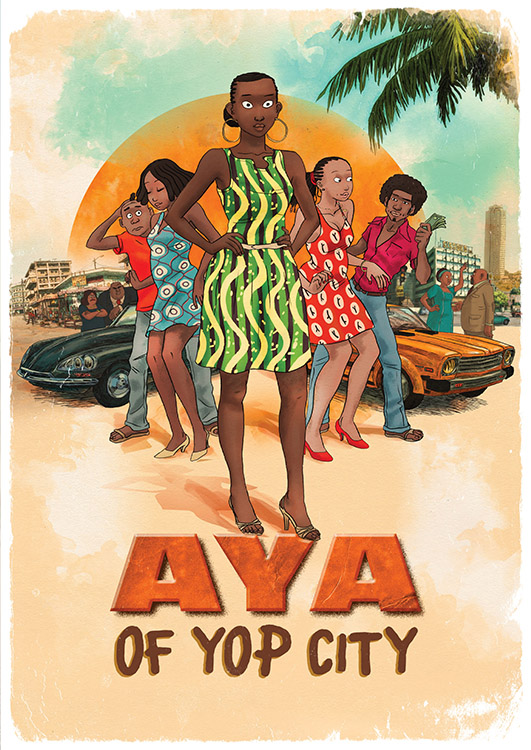 Against the colorful and spirited backdrop of the Ivory Coast in the 1970s, AYA OF YOP CITY is a vibrant, beautifully animated film. From teen romance to parental tribulations, it offers a rare glimpse into the daily lives of Africans, and is adapted from a best-selling series of graphic novels. Aya is 19, and she loves her neighborhood of Yop City in Abidjan, where everyone knows each other. It is always lively, with open markets, colorful fabrics, funky cafés and of course, music everywhere. Her mom Fanta is the neighborhood’s most trusted healer. Her dad is a sales rep for a brewery, and certainly gets his fill of the product. While Aya has dreams of becoming a doctor, her two best friends, Adjoua and Bintou, just like to hang out and spend their evenings dancing, drinking and flirting with boys. Their ambition is to follow plan C: Combs, Clothes and Chasing Men! Big trouble comes to town when Adjoua realizes she’s pregnant. Not to mention when Moussa, the spoiled rotten Sissoko boy finds out he’s going to be a dad! How can he tell his old man, one of the richest and most feared men in the whole country? AYA OF YOP CITY is a gorgeously rendered animated drama that places the Ivory Coast in a shimmering new light.