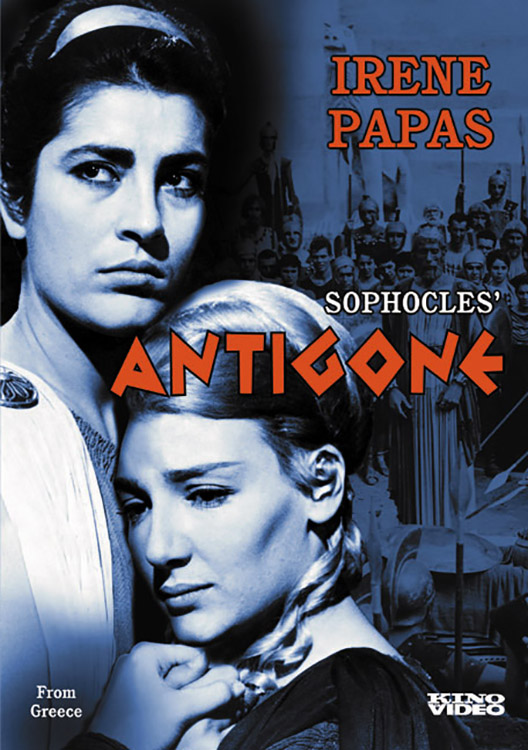 Sophocles' immortal tragedy ANTIGONE receives a definitive cinematic interpretation in this 1961 film. Irene Papas (Z, THE TROJAN WOMEN, THE GUNS OF NAVARONE) heads a cast of over 500 actors of the Greek stage and screen, joined by soldiers and horsemen of the Greek Royal Guard. Performing in the original Greek, Papas and, in particular, Manos Katrakis as the tyrannical Theban King Creon, embody Sophocles' timeless themes with earthy conviction and irresistible passion.

In the aftermath of a bloody civil war that fatally pitted both her brothers against each other, Antigone (Papas), daughter of Oedipus, picks through the carnage outside the gates of Thebes in search of her fallen siblings' bodies. Vowing to bury both men, Antigone defies a direct edict from Thebes' King Creon that Antigone's rebel brother remain unsanctified for having led the insurrection. Antigone's defiance of Creon and devotion to her shattered family divides the city of Thebes, threatens her sister's betrothal to Creon's son and invokes the wrath of a king willing to defy the gods themselves to satisfy his selfish vengeance. But by condemning Antigone, Creon unwittingly dooms himself to a sentence far crueler than any punishment he could inflict on his enemies.

While remaining faithful to the original text, director Georges Tzavellas interprets ANTIGONE as an intimate black and white epic that recalls Orson Welles' MACBETH and Laurence Olivier's filmed HAMLET. As relevant now as it was in the Fourth Century BC, ANTIGONE's rich tapestry of complex characters pushed to the limits of loyalty, savagery, love and fate comes vividly to life in this superior film adaptation.

"One of the best Greek productions of the 1960s, and highly recommended for students of classical Greek tragedy on film." - Robert Firsching, All Movie Guide