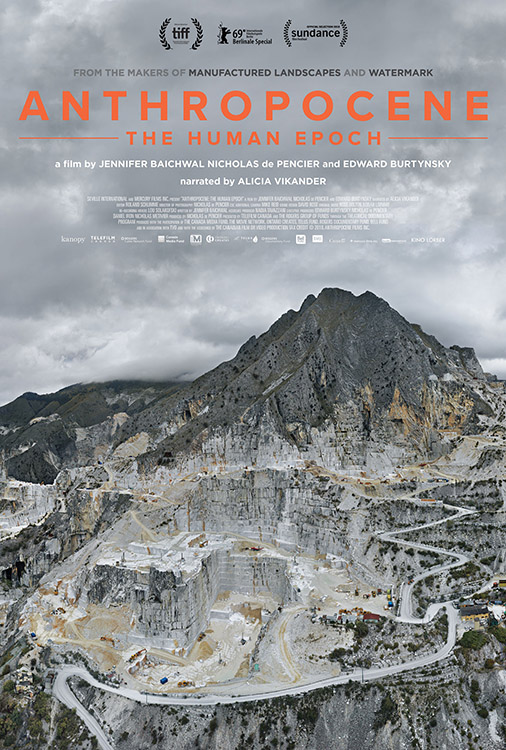 A stunning sensory experience and cinematic meditation on humanity’s massive reengineering of the planet, ANTHROPOCENE: THE HUMAN EPOCH is a years-in-the-making feature documentary from the award-winning team behind Manufactured Landscapes (2006) and Watermark (2013) and narrated by Alicia Vikander. The film follows the research of an international body of scientists, the Anthropocene Working Group who, after nearly 10 years of research, argue that the Holocene Epoch gave way to the Anthropocene Epoch in the mid-twentieth century as a result of profound and lasting human changes to the Earth.

From concrete seawalls in China that now cover 60% of the mainland coast, to the biggest terrestrial machines ever built in Germany, to psychedelic potash mines in Russia’s Ural Mountains, to metal festivals in the closed city of Norilsk, to the devastated Great Barrier Reef in Australia and massive marble quarries in Carrara, the filmmakers have traversed the globe using state of the art camera techniques to document the evidence and experience of human planetary domination. At the intersection of art and science, ANTHROPOCENE: THE HUMAN EPOCH witnesses a critical moment in geological history — bringing a provocative and unforgettable experience of our species's breadth and impact.

“To say that there are no easy answers to planetary woes is to state the obvious. But the film seeks to reveal rather than lecture, in the hope that our eyes will convince our brains to act before it's too late.”

“Its cinematography and passion for our planet make a strong case for your attention.”

"Anthropocene is visually stunning and it delivers an earnest warning about humanity’s future. Extras include a featurette with actor Edward Norton discussing Burtynsky’s photography. Recommended."