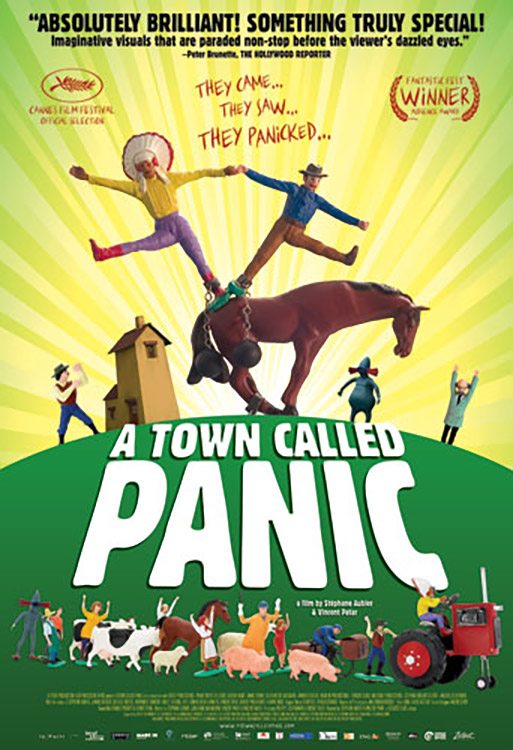 Hilarious and frequently surreal, the stop-motion extravaganza A TOWN CALLED PANIC has endless charms and raucous laughs for children from eight to eighty. Based on the Belgian animated cult TV series (which was released by Wallace & Gromit’s Aardman Studios), Panic stars three plastic toys named Cowboy, Indian and Horse who share a rambling house in a rural town that never fails to attract the weirdest events.

Cowboy and Indian’s plan to gift Horse with a homemade barbeque backfires when they accidentally buy 50 million bricks. Whoops! This sets off a perilously wacky chain of events as the trio travel to the center of the earth, trek across frozen tundra and discover a parallel underwater universe of pointy-headed (and dishonest!) creatures. Each speedy character is voiced—and animated—as if they are filled with laughing gas. With panic a permanent feature of life in this papier-mâché burg, will Horse and his equine paramour—flame-tressed music teacher Madame Longray (Jeanne Balibar)—ever find a quiet moment alone? A sort of Gallic Monty Python crossed with Art Clokey on acid, A TOWN CALLED PANIC is zany, brainy and altogether insane-y!

Please note: Despite occasional bad language in the original French, A TOWN CALLED PANIC is entirely appropriate for children.