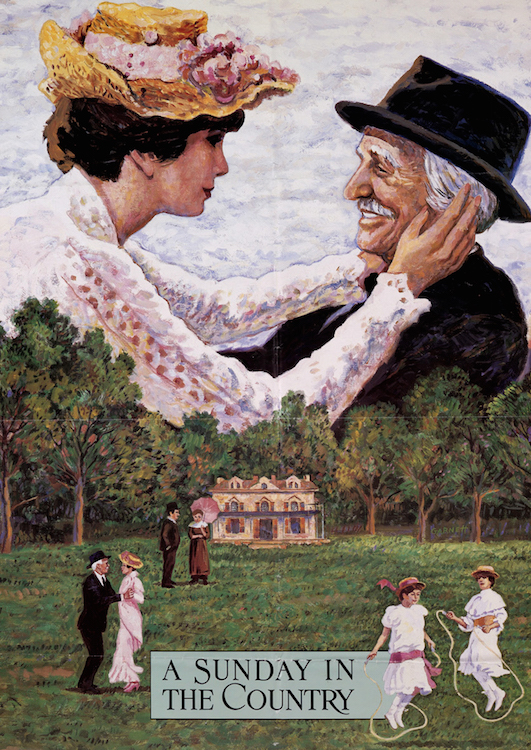 A Sunday in the Country

Alive with the subtle brush strokes of an artist at the top of his form, Bertrand Tavernier's acclaimed A SUNDAY IN THE COUNTRY is a lovingly photographed and exquisitely acted portrait of French family life on the brink of World War I.

Monsieur Ladmiral (Louis Ducreaux), an Impressionist painter by trade, awakes happily one Sunday to meet his son's family for their weekly visit to his Parisian countryside home. Before long, however, a sense of sadness and regret infect the day. Ladmiral is a widower in his twilight years, and the push of time is beginning to strain family relations. Though son Gonzague (Michel Aumont) provides stability and grandchildren, it is daughter Irene who inspires the old man in his meditations about life. Unexpectedly, Irene (Sabine Azema) arrives at the gathering in her fast new car. By the time the afternoon is over, her vibrant spirit shakes the family to its core...and Ladmiral discovers a side of himself he never knew.

Based on a novel by Pierre Bost, A SUNDAY IN THE COUNTRY becomes an Impressionist painting in itself, a moving picture of the hopes, disappointments, and small joys of family as a father's life reaches its autumn season. The film was one of the major works to seal Tavernier's reputation in the United States, along with The Clockmaker, Coup de Torchon, 'Round Midnight, and more recently, Capitaine Conan. Kino is proud to present it here in a letterboxed, newly remastered version.

"A virtuoso passage of pure cinema of a kind that no more than four or five working directors are capable of creating!" - Dave Kehr, Chicago Reader

"One of the decade's best! It's rare that a film so pictorially gorgeous is so tender, wise and humane." - Jay Carr, The Boston Globe