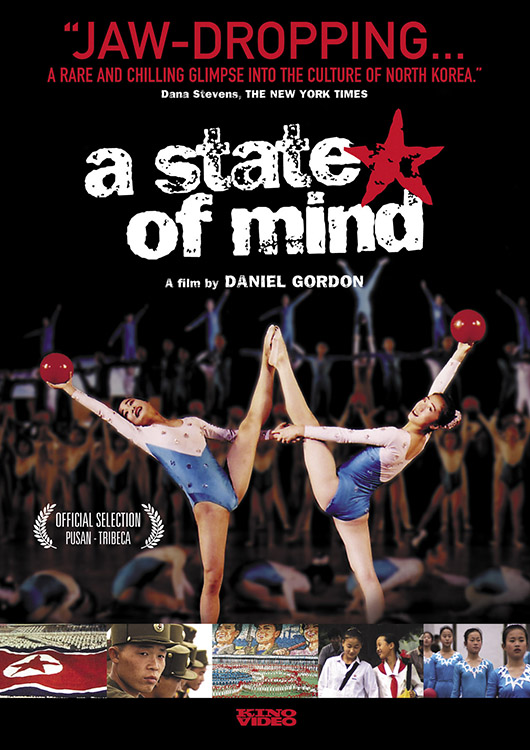 A State of Mind

A STATE OF MIND follows two North Korean schoolgirls and their families in the lead up to the "Mass Games" — the biggest and most elaborate human performance on earth — and in the process reveals more of North Korea than ever before.

Following on from the 2002 award-winning documentary The Game of Their Lives, VeryMuchSo productions was granted permission from the North Korean film authorities to make a second documentary: an observational film following two young gymnasts, 13-year-old Pak Hyon Sun and 11-year-old Kim Song Yun, and their families for over eight months in the lead up to the Mass Games — involving a cast of thousands in a choreographed socialist realism spectacular — the biggest and most elaborate human performance on earth.

A STATE OF MIND provides a rare glimpse into what is one of the world's least known societies. North Korea is sealed off from outside influences. It borders China and Russia to the north, and to the south there is a 4km wide impenetrable border with South Korea. The country follows its own communist ideals, a strict philosophy known as the Juche Idea wrapped around the worship of the Kim dynasty — Kim Il Sung, their Eternal President who died in 1994 but remains Head of State, and his son and successor, Kim Jong Il, known as the General.

The crew began filming in February 2003 with unique access to the two families' day to day life from home, at work in the city and countryside — a remarkable insight into a part of North Korean society never before allowed. As their Korean minder explained "you have to understand, no one has ever been allowed to see, let alone film, what you are witnessing."

Western eyes, for the very first time, have a unique insight into North Korean society, its people, its way of life, and its total devotion to their leader and ruler, Kim Jong Il.

"93 unblinking minutes of insight into the lives and minds of the people living in North Korea. One of the last locked-down communist dictatorships." — The Los Angeles Times

"The Mass Games are performed for the sole satisfaction of Kim Jong-Il, North Korea's generalissimo. A Stalin with less self-doubt, Kim gave Gordon and Co. what the director called "unparalleled cooperation" to make a movie about the games, apparently believing, in his arrogance, that they actually would. What Gordon created instead — with the extraordinary cinematography of Nick Bennett, and the first-rate editing of Peter Haddon — is a portrait of the power of power." — New York Newsday