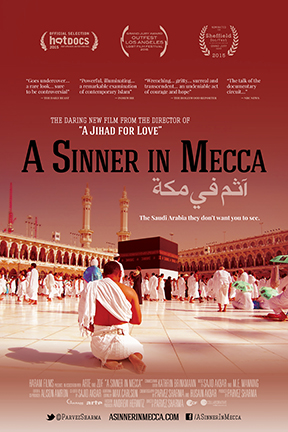 A Sinner in Mecca

For a gay filmmaker, filming in Saudi Arabia presents two serious challenges: filming is forbidden and homosexuality is punishable by death. For filmmaker Parvez Sharma, however, these were risks he had to assume as he undertook the Hajj, a pilgrimage considered the greatest accomplishment and aspiration within Islam, his religion. On his journey Parvez aims to look beyond 21st-century Islam’s crises of religious extremism, commercialism and sectarian battles. He brings back the story of the religion like it has never been told before, having endured the biggest jihad there is: the struggle with the self.

"Mr. Sharma has created a swirling, fascinating travelogue and a stirring celebration of devotion...we emerge from his film more enlightened." New York Times

"Wrenching...gritty...surreal and transcendent; Visceral and abstract...an undeniable act of courage and hope." The Hollywood Reporter

"Next time you hear politicians or right-wing broadcasters asking why 'moderate' Muslims don't denounce terrorism, show them this movie" The Village Voice