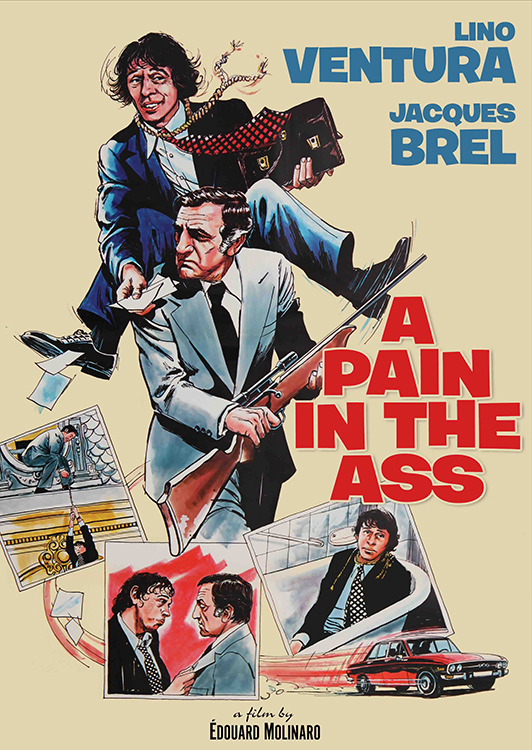 A Pain in the Ass (L'emmerdeur)

From director Édouard Molinaro (La Cage aux Folles, La Cage aux Folles II) and writer Francis Veber (The Tall Blond Man with One Black Shoe, La Chevre) comes this action-comedy starring screen great Lino Ventura (Illustrious Corpses, The Sicilian Clan) with Jacques Brel (Jacques Brel Is Alive and Well and Living in Paris) and Caroline Cellier (This Man Must Die). When a hired killer crosses paths with a suicidal shirt salesman, the resulting calamity makes for one of the funniest, most original films you’ll ever see. Ralf Milan (Ventura) has come to Montpellier to fulfill a “contract” that a powerful crime organization has placed on a man about to testify against the mob at an upcoming trial. As Ralf waits for the man in his hotel room with gun in hand, he notices something very strange in the attaching room next door: François Pignon (Brel), a cuckolded, unhappy man who is trying to hang himself, but is failing—ridiculously. Ralf finds himself compelled to protect François from his hapless attempts at self-destruction to avoid attracting attention. What develops is one odd friendship you’ll never forget. Legendary filmmaker Billy Wilder remade the film in 1981 as Buddy Buddy, starring Walter Matthau and Jack Lemmon.