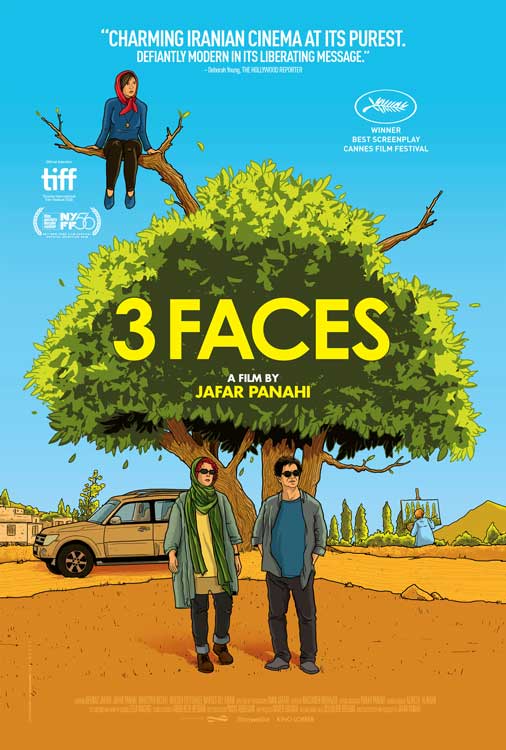 Iranian director Jafar Panahi’s fourth completed feature since he was officially banned from filmmaking is one of his very best. Panahi begins with a smartphone video shot by a young woman (Marziyeh Rezaei) who announces to the camera that her parents have forbidden her from realizing her dream of acting and then, by all appearances, takes her own life. The recipient of the video, Behnaz Jafari, as herself, asks Panahi, as himself, to drive her to the woman’s tiny home village near the Turkish border to investigate. From there, 3 FACES builds in narrative, thematic, and visual intricacy to put forth a grand expression of community and solidarity under the eye of oppression. – New York Film Festival

“Charming Iranian cinema at its purest. Defiantly modern in its liberating message.”

“An artful, surprising and thrillingly intelligent story about a few women trying to make a difference.”

“An urgent mystery. Panahi's sympathies are clear, but his humanity is boundless.”

“A heartfelt statement of solidarity… such generosity of spirit is its own quietly fierce act of cinematic defiance.”

“Full of intelligence and humility and a real respect for women and for female actors. Gentle, elusive, and redolent of this director’s mysterious Iranian zen.”

"A political and gently feminist statement... Panahi can't help but flaunt optimism wherever he sees it."

“Captivating. A humanist drama of female power in Iran.”

“A sly fictional commentary on life in Iran, hope, the country’s cinema legacy, and the continuity of history, disguised with folksy infusions of humor as a shaggy dog story.”

“A gently provocative meditation on the role of creative souls in modern-day Iran.”

“A beautiful expression of artistic solidarity.”

“A hymn to the irrepressibility of screen storytelling.”